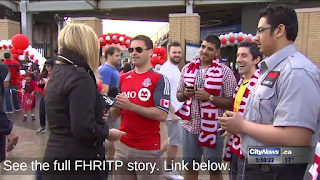 It’s the clip that has been seen around the world, well at least Canada.

News reporter Shauna Hunt encountered a team of neanderthals outside a Toronto FC soccer game, which on it’s own is not so unusual, at least for females these days. But where the story got interesting was that one of the perpetrators was fired from his job, once his employer caught wind of his ugly behavior. He and his gaggle of cavemen buddies were also banned from attending the pitch for a year.

Because the venue was owned by Maple Leaf Sports & Entertainment, the fools may end up being banned indefinitely from all MLSE events, and certainly from all Major League Soccer games at other centers.

Some might think that women can’t take a joke. We can. We just don’t like being demeaned, especially in our workplace.

Like Hunt says in the clip, it gets old very quickly. The string of incidents keeps growing. And with respect to the “man” in the video, I’ll bet money his mother is not laughing. If she is, she is more a candidate for child protective services than mother of the year.

As women, we’re mad as hell and we prefer not to experience these acts of moronism any more.

Personally, I experienced the lack of respect a different way. In the city where I did most of my reporting, the players were, for the most part, great to work with. I had very few issues with them. The behaviors that impacted my ability to do my job came from management. On more than one occasion, I’d be in the middle of a one-on-one interview with a player, who would be in mid-sentence to answer a question, when a PR director or team president, or another member of the team that wasn’t on the playing field, would barge in, and interrupt only to talk to the player about something mundane. I could tell it even annoyed the player, who was forced to recalibrate his thoughts to resume the interview after the team representative finally left the scene.

The examples of the harassment of female reporters are endless. Below are just a few that will give you the idea of the working environment.