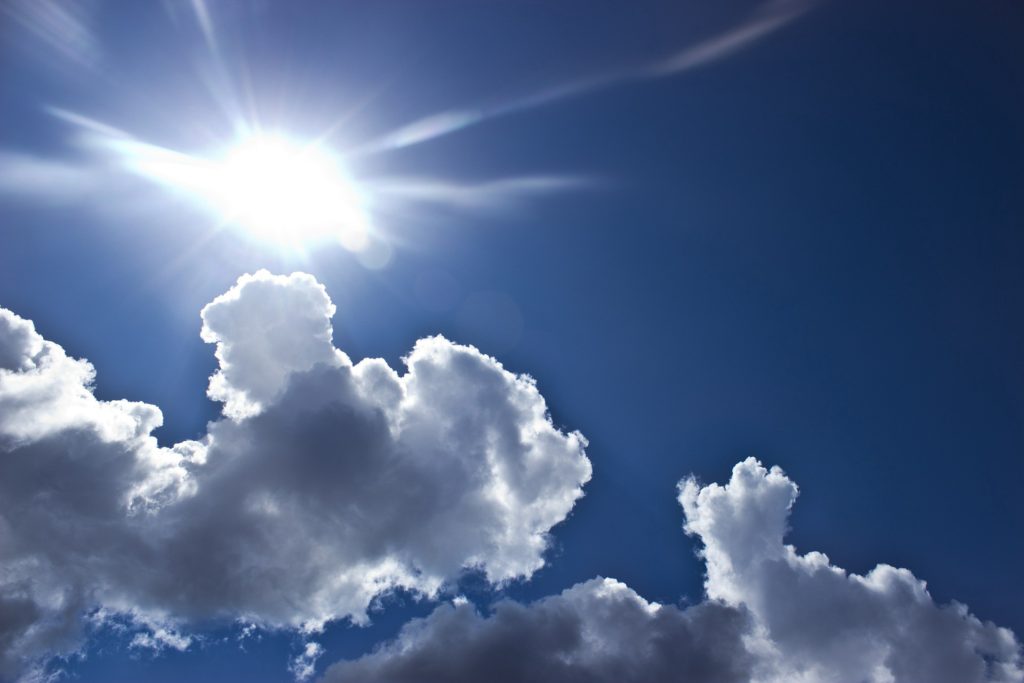 You are nothing without your health.

I’m not one to get sick often and can probably count on one hand how many colds I’ve had since 2010. In mid April 2017, I had caught what I believed was the flu. My M.O. is to try and sleep it off but it wasn’t working. In fact, it was getting more uncomfortable to sleep and harder to breathe.

My asthma had been under control since the early 1990s, but this particular Saturday night, I had to sleep sitting upright on the couch because I was suffocating laying down. The next morning, it was pretty evident I needed to get my ass to the hospital.

As with my previous hospital visits (fortunately I live in Canada, where no out-of-pocket dollars are required for healthcare), when you are asthmatic, you are steered to the front of the line. I was in an emergency bed within 15 minutes of my arrival. I was also told that if I had waited one day, I would be (as we say in Alberta) T.U.: tits up (dead).

I needed to document my experience for me, and to perhaps lend a glimpse into what others with a chronic illness — something way worse than me, which was relatively short-term — might also deal with on a regular basis.

So this is how I get to spend spring break?

In the hospital emergency ward, it was quickly determined that I would be admitted for pneumonia, complicated by asthma. There wasn’t five minutes that went by when a nurse or doctor didn’t check in on me.

After more than a day here, a bed finally became available in the gastronomical ward. I was put under isolation until they could determine if my symptoms were viral or bacterial. Anyone visiting me for the next day and a half, including the staff, had to suit up in what I called hazmat gear before entering the private room. Fortunately, I wasn’t contagious, after all.

It’s my birthday and I can party with all the drugs my body will allow. 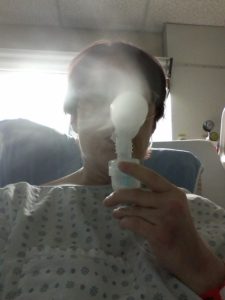 Nope, this isn’t vaping. Besides the oxygen tube permanently attached to my nose, the nebulizer, filled with Ventolin or Pulmicort, was the main apparatus keeping me alive. Sprinkle in antibiotics, anti-nausea drugs, fentanyl, then OxyContin and it was party-city, or rather zonked-out city and unable to sleep. The painkillers were prescribed every four hours. I needed them every three.

Day three in the hospital meant this was where I spent my birthday. Hey, it wasn’t all bad, considering I had breakfast, lunch, and supper in bed with round the clock care and unlimited free wifi to boot. Not too shabby.

No release date in sight. 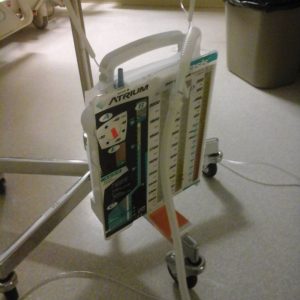 Why is it that any time during the course of a day, the veins are popping out of my hands without a care in the world, but as soon as I hit the hospital or a doctor’s office, they disappear faster than Ryan Leaf’s football career? Both hands and wrists eventually became black and blue from the frustrated attempts to find places to insert the intravenous needle. But the IV pole wasn’t my only travel buddy.

Yes, I had pneumonia and the fluid in both lungs were being light-sabered by antibiotics through the IV. However, there was much concern for my recovery because fluid had seeped out of the lungs and saturated my chest cavity, pushing my left lung to collapse. There was only one way to remove that fluid, and that was with my new travel buddy: what I liked to call my lung juicer.

The chest drain was inserted through my back (making it even more uncomfortable to sleep sitting upright) and its capture box showed how much fluid was coming out. After a number of of days and daily x-rays, it was determined that the fluid wasn’t coming out fast enough, so after an MRI scan, they took out the tube to the lung juicer and inserted a new one with a bigger tube. I daresay that I yelled like a banshee.

Another couple of days went by and this one wasn’t draining fast enough either. So the next step was, (in an non-technical term) to induce the draining. They did this by injecting some fluid somewhere into the lung buddy (I assume. I couldn’t see where exactly because the thing came out of my back.) Not a fun feeling at all. It gushed out so much after that they had to change the cartridge before it overflowed. A number of days later, I had a second induce injection. Then blood came out with the fluid, so the doctor put a halt on induce injection number three. 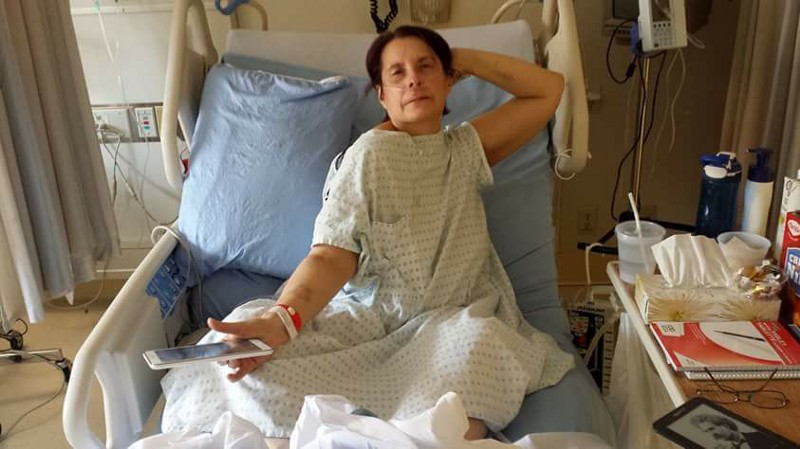 Once I was moved into a two-bed unit after the few days in isolation, my roommates came and went. They were in for something completely different. One of those roommates was in for about four days. We hit it off instantaneously. She was in very serious condition with a hernia infection. I think it took us less than half a day to become Facebook friends. Her daughter, too. You meet new friends in the most unusual places. There was a night we were both feeling a bit punchy, so we took pictures of each other posing for the camera to have a little fun. She took this Tinder profile pose of me in the frame above.

I was an anomaly in this gastronomical unit. Every day when my bandages were changed, a nurse wanted to watch. They had never seen a chest drain before. I got that unit when it was available because there was never a bed open in the pulmonary ward.

My release came on day 20. The hospital sent me home with prescriptions galore, a printout of the play-by-play of the entire stay, and a breathing exercise machine. The left lung was still deflated and there was some residual fluid in the chest cavity, but doctors deemed I was stable enough to start working my way back into physical society slowly. Very slowly. Turtle slowly. 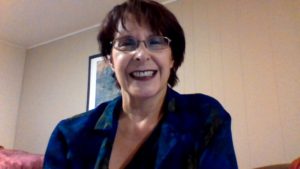 My lung may never fully inflate, but the doctors thought it might get to at least 90 percent. I’ve had to increase and mix up my asthma medications in order to find the right cocktail that will work the best. Physically, I feel better than I did before I got sick. Time will tell if the fluid is ever completely gone.

At times, it seemed like touch and go. I kept my spirits up because of the wifi and ability to connect with the world as usual via Facebook, email, Twitter, and Instagram. Without that, I would have probably taken a butter knife to my groin on day three.

Kudos to all the hospitals out there that offer free wifi to their patients. It is as much of a lifeline as the drugs themselves. It kept me sane and allowed me to write via pictures and posts, when a Medium blog would have been out of the question. (Your brain is a tad foggy when you’re loaded up on truckloads of meds.)

What the experience taught me was to wrap gratitude around me like a blanket, even though I had much of it in my life before. I have gained a new respect for the people who suffer from chronic, debilitating sickness, who continue to take each day by the balls and make their mark. The fact that our Canadian healthcare system is fantastic, and that our hospital nurses, doctors, and support staff are Purple Heart material goes without saying.

Debbie Elicksen is a virtual publicist, social media and marketing strategist. She helps businesses find and empower their voice through digital communications by creating visibility and brand awareness for new and seasoned organizations so that it helps them connect with quality people locally and worldwide to grow their business. She has over 20 years of direct media experience: TV, print, radio, and Internet; is a former sportswriter; and has written and published 14 books. @bookpublish101 https://www.debbieelicksen.com  http://www.magpieexecutive.com/