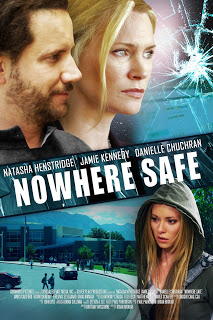 Just because you can doesn’t mean you should. That is the problem with the ease at which the Internet and all of its tools can play into the hands of those who seek revenge and incite mob mentality.
Bullies bully to make themselves feel like they are more important than they are. They use the Internet because it can do the most damage to someone’s reputation. It takes a special kind of psychopath to create an account in someone else’s name and use it to publish their own thoughts, which are contrary to the person they are impersonating. It masks the psychopath’s crime and it makes the innocent a target.
This is the true story behind the movie Nowhere Safe (2014), directed by Brian Brough and written by Brittany Wiscombe.
Ashley Evans (Danielle Chuchran) is a good student who becomes the target of two mean girls who create a plan to impersonate her and make her a cyberbully. Things get so ugly, that Ashley and her mother, who is a teacher her daughter’s school, Julie Johnson (Natasha Henstridge) are forced into a midnight move to a new community where they hope to rebuild with a clean slate.
It’s a lesson on choices. Do you run or do you fight? Ashley and her mother chose to run. When the past finds its way into their new lives, where the whole nasty journey looks like it may continue, they choose a different route. Ashley finds her voice and ultimately gets her life back in the process.