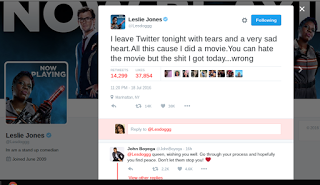 (Warning: I am not going to talk nice in this entry.)

Didn’t your mother always tell you that if you don’t have anything nice to say, don’t say anything at all? Then why the hell do you think it’s okay do talk shit on Twitter?

Behind every social media account is a real live, breathing human being. Yes, that includes celebrities, too. Even the trolls and bullies are real people behind their sometimes anonymous avatars. But for some reason, there are people representing the lowest denominator of society, because their lives suck, they have to make everyone else’s suffer.

Now we’re not talking the fun memes we see circulating. While they make fun of someone’s very public error, they’re not intended to seriously hurt someone. In fact, a really good meme can actually get a nodding approval from the target, such as the original Texts from Hillary. There are some very clever and humorous tweets that also play into a high profile train wreck, such as the Melania Trump speech at the 2016 Republican Convention. It’s like a Saturday Night Live skit. Consider it an honor that so many people took such an invested effort to feature you. It compounds the mistake, but the furor is short-lived. There will be memes that keep their staying power, usually an image, but for the most part, there is no malice intended with these kind of posts.

When they get vile, nasty, and highly personal, that’s when you have a problem. Here are some terrible examples, but they are tame compared to some:

No plagiarism here, folks. These are screenshots of real tweets, and some may even be real names. Because like we see in racism and bigotry, haters are proud of their opinions.
You don’t always win if you try to engage a troll or cyberbully. In fact, it adds fuel to their toxic fire. They live for it. Crave it. You know why? It’s the only time anyone will acknowledge their miserable existence.
A lot of the targets are female and especially females who are non-white. But, when it comes to body shaming, and hell, even slut shaming, women can be the worst culprits. No surprise, really. As a female, if you’ve ever worked in an all-female office, there is a lot of “Ooh, she did this and that.” “Did you see what she was wearing?” The Mean Girls cafeteria is a real thing.
Kudos to Jennifer Aniston for going on the offensive. It probably thrilled the trolls to start their engines, but hey, she was at least able to control her message. And she did not address anyone directly. That’s the key. A shut down can work and spread like wildfire because it empowers the others who have been there. Usually, they are not directed at one troll, but sometimes they can be. When that happens and the shutdown spreads, it’s a beautiful thing. The troll can’t usually fight back because his toxic excrement gets lost in the positive energy.
So Dear Shamers:
Race shamers: Our DNA roots us all from Africa. Get over yourself. Barak Obama is your very distant cousin.
Body shamers: I’ll bet the last time you looked in the mirror, you didn’t see Ryan Gosling or Jennifer Lawrence staring back at you.
Slut shamers: Just because you haven’t been laid in decades (or see the answer to body shamers above) … and you probably just gave your girlfriend or boyfriend gonorrhea.