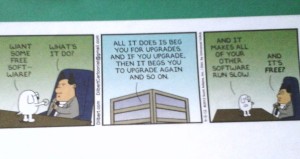 There is a lot of great software out there, along with user-friendly and necessary apps. Sometimes it isn’t always the free downloads that do it. Your paid programs can also become software from hell, launching an all-out attack of freeware, adware, and God knows what into your system.

Eliminate the risk by only downloading directly from the main site, such as the antivirus company, Google Play, Apple. They have already pre-screened and checked that the download will be safe. Then no matter what, do not add any of the suggested products offered up during the download process.
A credible website, when it offers third-party free downloads of the software or apps you’re looking for, can also become a nightmare. I made this mistake twice.
For example, there is a website that is the go-to for learning about how software and apps rate with users. On the same line as the review, it offers the download of the program direct from their site. You are better off opening a new tab to go directly to the original source. Your computer will thank you.
In the case of software (even anti-virus software), a lot of times when you click through the prompts, it automatically downloads toolbars and all sorts of crap into your computer. Some of it is impossible to remove. You can remove the problem, but there is often a residue that reminds you every time you start up that next time, don’t download third-party stuff. The good thing about Google is, when you key into the search engine the name of the problem and how to remove it, you’ll find a wealth of tutorials. Pick the one that seems the easiest step-by-step.