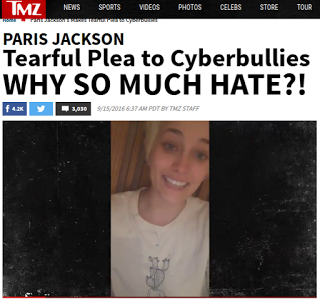 This is heartbreaking. You may remember Paris Jackson as the “leave Britney alone” girl when she posted a YouTube video about all the Internet comments Britney Spears was getting for some of her behavior.
She received so much abuse over her public fame that she tried to commit suicide. She was 14 years old. Fortunately, she did not succeed.
What Paris did do was take a hiatus from social media. Upon her return, the abuse resumed. For God’s sake, people. She’s only 18 now.
But it doesn’t matter if she’s 18, 38, or 78, nobody deserves the hate trolling that some think the Internet has given them license for. A pox on all of these assholes.
The world needs more caring people like Paris Jackson, so leave Paris alone!